By Lee PetermanLinn County SWA president
The Linn Chapter of OSWA hosted a Woodlands Workshop Night Oct. 11 at the OSU Extension office in Tangent. Attendance was good, with nearly 20 individuals and represented members from both Linn and Benton chapters of OSWA.
There were four guest speakers and a wide variety of topics covered.
Heather Tritt is from the USDA / Farm Service Agency. She is also the executive director for Linn County FSA. Tritt gave a brief, but information-packed presentation on the FSA "Disaster Assistance" programs available to small woodlands owners, such as after the ice storms of 2015 - 2016. Her focus was simple: if your property or trees were affected by a natural disaster, such as an ice storm, contact your local FSA office to begin a claim.
Ray Dodd, brought his a specialist knowledge on bats with ODFW. Ray had a great slide-show with numerous photos of the local Oregon bats. He detailed how the ODFW is learning about bat population density of species by using acoustic monitoring stations set up at various points around the state. These amazing creatures are the only flying mammal and use echo-location to find prey. They are opportunistic hunters, yet a single bat can literally eat thousands of mosquitos every night, he noted. There was some sad news which he imparted regarding deaths from wind-turbines located in migration routes and a virulent disease accidentally imported from Europe called "White-nose syndrome.” The disease — while not yet in Oregon, has devastated eastern bat populations. It is coming this way, he said, and there is not much we can do about it except to provide good habitat so the bats stand a better chance of survival.
OSU doctoral candidate from the School of Forestry; Sonia Bruck, spoke about on agroforestry and how some basic principles can be utilized to expand productivity as well as possible income in private woodlands in the Willamette Valley. Some of the points she made were on row-cropping; as in rows of hazel nuts or corn or strawberries between rows of just-planted seedling trees, to diversify land use. Another option, she said, is “silva-pasturing" which is simply letting cattle or other livestock graze the spaces under more mature trees, thereby keeping down “ladder-fuels.” She also gave a detailed account of some of her research on tree-farms in North Carolina and eastern Oregon, comparing how some plans made money for the land owners, and some did not do quite as well, but did further knowledge in the field and generated greater interest in the concepts.
Sweet Home ODF stewardship forester Steve Kendall was timely after this past, scorching hot summer: “Fire Prevention and Resistance for Small Woodland Owners.” Kendall had two, great information-packed handouts; the first was a list of points small woodland owners should know regarding fire-season — and types of ignition for wildfires, both controllable sources — unattended or careless slash burning or target-shooting as well as uncontrollable sources like thoughtless neighbors or lightning. The second handout contained valuable contact information, for the Linn County Burn Line (541) 451-1904 -- necessary to use “before you burn,” as well as the ODF-Sweet Home Unit (541) 367-6108 to obtain information on fire conditions and safety tips for preventing wildfires in your woodland.
Thanks to Brad Withrow-Robinson for starting the ball rolling on this Woodland Workshop and for getting the word out in “The Compass.” Thanks as well to Jody Einerson for her assistance in providing contact information for guest speakers. Finally, an especially hearty thank you to Shirley Jolliff and Nancy Mauter, both of whom again selflessly gave their time and baking talents to provide delightful, delectable biscotti, apple tarts and chocolate chip cookies for the refreshment table. Without them, the evening would have been informative, but not nearly as tasty...

Popular posts from this blog 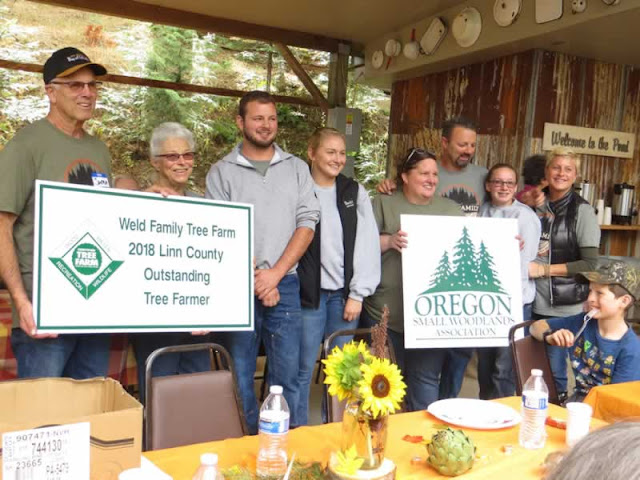 Weld Family Tree Farm Tour By Jim Merzenich Past president Sherman and Leslie Weld were selected as Linn County’s tree farmers of the year for 2018. The Weld family tree farm consists of 140 acres overlooking the Calapooia river valley near Holley. The property was purchased 50 years ago by Lester and Faye Weld, Sherman’s parents. About 8 acres of the site was a landfill for the family’s Sweet Home Sanitation business. Today that acreage is a 25-year-old Douglas fir plantation. The acreage also includes former grazing and orchard land. In the past twenty-five years much of this land has been cleared, sprayed, ripped to a 36 inch depth and planted in Douglas-fir. These stands are now being commercially thinned. The tour of the Weld Family tree farm was held on Saturday Sep 22nd beginning at 10 am. Over seventy guests in addition to many members of the Weld family participated. A tractor drawn wagon was provided to transport guests to the five tour stops but many people cho
Read more

March 28, 2019
Close to 100 volunteers over two days pushed the 24th annual Linn County Small Woodlands Association seedling sale to near-record numbers. More than 9,000 seedlings were sold Feb. 2 before noon — including almost 150 pre-orders that were packaged Feb. 1. Both those figures are near-records. “It was one of our best years ever,” said Sherm Sallee, a co-founder of the event. Next year’s silver anniversary seedling sale will be Saturday, Feb. 1 with preorders packaged Jan. 31. The event at the Linn County Expo provides $5,600 in scholarships annually to both university forestry students and Linn County 4-Hers involved in forestry. In addition, the event allows LCSWA members and the general public to get quality nursery stock at a good price, said event chairwoman Bonnie Marshall. Scholarship winners, 4-Hers and their parents along with membership set up and operate the sale. “I just love seeing the generations come together, with the 4Hers, their parents and our members part
Read more

March 28, 2019
NL 1017 Linn Forest Protective Association Law Enforcement Committee By Sherm Sallee Mid-August is the time frame for the annual Linn Forest Protective Association (LFPA) Law Enforcement Committee meeting. It precedes the hunting season and is a time for forestland owners to learn about problems law enforcement officials are finding in the timberlands as well as to discuss the availability of their lands for public hunting with local law enforcement (State Police and Sheriff’s Office). This year’s meeting also included an update to the status for preparation for the upcoming solar eclipse event. By the time you read this article, you will know the outcome of the event on the forestland in Linn County and throughout the state. Hopefully it will be a non-event as far as forest fires are concerned. As of now, the forestlands are extremely dry. As a result, almost all landowners are discouraging visitors until a significant rain event occurs. Gates are locked and signs are posted to d
Read more